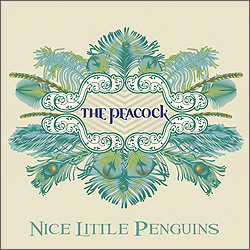 After experimenting with an album in their native tongue (‘Som En Rejse‘), the Danish band Nice Little Penguins just released their first single in English in five years.

‘The Peacock‘ it’s called, and as many of the band’s previous works, it takes the Penguin-sound just a little bit further. Using the usual unmistakable mix of Beatles, Beach Boys, Crowded House and the like, the penguin-quartet also added a bit of eerie crime fiction mood this time – creating another layer to support the story about a seemingly harmless Peacock wandering around bassplayer Bo Feierskov’s garden.

All in all a really well composed and well written piece, with both earcatching melody and harmonic lyrics, consolidating band members Michael Kolster and Bo Feierskov as some of the best songwriters in Denmark.

Sit down and have a break while listening – and tell me what you make of it.

Much to the fans’ disappointment there’s no immediate plans for another album.

“We haven’t recorded any other songs or demos at this time.”

… Bo Feierskov excluded in a Facebook-message the other day. However, fans can look forward to an upcoming EP and to a few live gigs in Denmark later in 2010, he says.