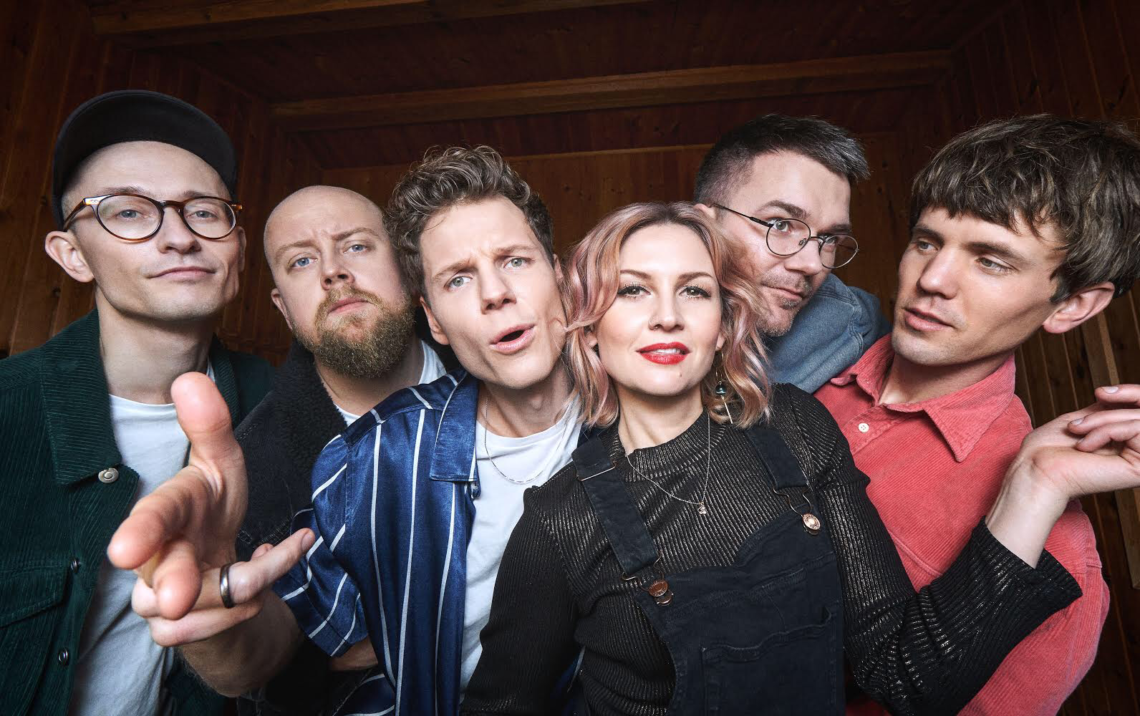 17 years ago six obviously gifted youngsters from the Danish city, Silkeborg, formed a rock band called Sodastar. Not only was the band quite mediocre. The band name was already taken by a German outfit. Bugger!

According to lead singer Anders SG the band simply could not make rock music as well as their friends and peers, and as it were, the band’s heart was beating for well-composed indie-pop anyway. As soon as the six realised this, only a cloud of dust and faint smell of burnt rubber remained.

The world got an Alphabeat!

This story formed the introduction of the 2020 Alphabeat live experience in Vejle, Denmark. The track ‘Sing a Song’ from their 2019 album ‘Don’t Know What’s Cool Anymore’ opened the event as a autobiographical recapture of the years spent in the fast lane followed by the almost seven years in hiatus.

Troels, Stine, Rasmus and 3x Anders have gone through a lot – as a band, as artists, and as persons. They have matured, they are now better artists, more experienced in life, and together they definitely shine brighter than ever.

More room for bass and rhythm guitar
All since the very beginnings in 2007 and onwards, Alphabeat has been different from the majority of other similar pop outfits. Making modern pop/dance music funky and with extended shelf life is no easy task, why most of it exits the charts as fast as it enters them.

With Anders B (guitar), Anders R (bass) and Troels Hansen (drums), Alphabeat has an extremely lively and funky foundation upon which every single dance step you inadvertently take rests. Listen to ‘I Don’t Know What’s Cool Anymore’ and ‘Shadows’ and watch what happens with your feet.

In both songs, the keen listener will notice keyboard-man, Rasmus Nagel, adding perfect fill and grooviness in just the right dosage too.

Country on the dance floor
As mentioned above, Alphabeat has matured – quite a lot! The band chose to re-introduce themselves, first with the auto-biographical ‘Sing a song’ and then with the somewhat nostalgic ‘Back of My Bike’. Both tracks are relatively slow-beat compared to what most fans recall 10+ years ago. It suits the Fantastic Six from Silkeborg a lot and makes the Alphabeat experience much deeper. Thumbs up!

However, from there everything went back to the Alpha-roots. First moving up a gear with the old hit ‘Boyfriend’, then going full throttle on the dance floor with ‘I Don’t Know What’s Cool Anymore’, ‘Vacation’, ‘Fantastic 6’ and ‘Goldmine’.

The latter, likely to be the all-over-the-place summer hit of 2020, changed the colour of the party; just a tiny bit. Some might not even have noticed it while trying to catch their breath. But, sometimes the devil is in the detail. However, we at Latebar did. A detail that may (may not) herald something brand new to the Alphabeat we know. It now includes country music!

Give it a go, and tell me, if you can’t hear country in the vocal work?!

Later in the set, Stine Bramsen confirmed it:

“We kinda found out, that we quite like country music too”

Then she introduced the song ‘Sometimes’, much to the joy of the crowd who joined in as soon as Bramsen started singing. It not only is a beautiful and harmonic track. It is also something as rare as an under-120-bpm song by the Fantastic 6. Yet, adding this song to the set-list just underlines the fact that Alphabeat appears more versatile and complete than they ever did.

Embrace your crowd, endorse your fans
It is hard not to keep your eyes glued to the band’s lead singers, Anders and Stine. They both look stunning and come across the stage with their engaging moves and vocal strengths. However, their defining strength is the way they almost embrace the audience. Almost always on the edge of the stage, never turning their back to the fans. Several times during this gig we felt sure Anders would actually jump the stage to dance with the fans.

The feeling of being part of a concert instead of just being a spectator to it, makes a stronger and more lasting experience. Alphabeat has been called “The greatest garden party since The B52’s”. We tend to agree!

After just one hour and 20 minutes the whole thing was over. Like a dance floor defibrillator, the event had left large parts of the audience soaked in sweat and wobbling towards the bars and life-sustaining beverages. Had the band carried on someone would have passed out for sure.

This surely was the return of the Alphabeat. We say: Welcome back 🙂